The time in Batam had come to an end, and Henok and Kamty had arranged for me to spend the rest of my time visiting their home island of Java.  We boarded a plane in Batam and flew to Jogjakarta–Yogyakarta is the way I saw it spelled once we arrived there.  They arranged for a driver and car to meet us at the airport–and it was the same driver and car that was to take us to Surabaya.  Jogjakarta is South and somewhat East on the island, and Surabaya is in the Northeast of the island.  It is a very old city that is also the capital of the Sultanate, and for five years after the Japanese occupation, it was the capital of Indonesia. 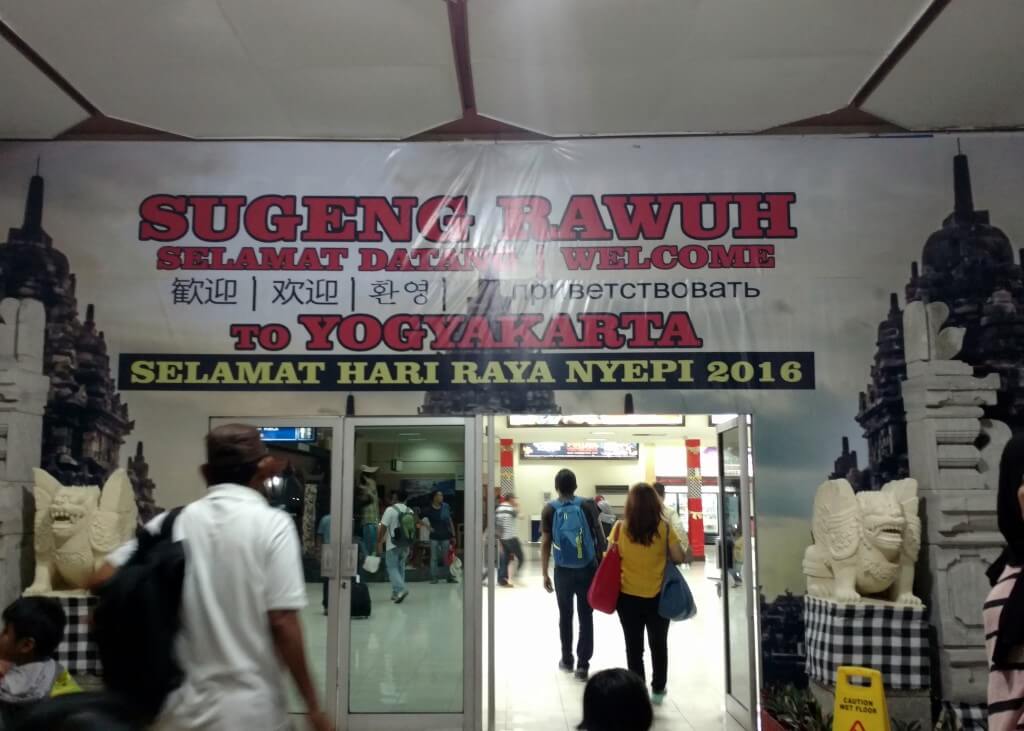 Jogjakarta is especially known for its batik–and there are dozens of shops where you can purchase it.  It is also the best place to get batik items at a very reasonable price.  Some of the batik is handpainted and some is printed.  Kamty was particularly interested in getting batik shirts for her staff at her school. 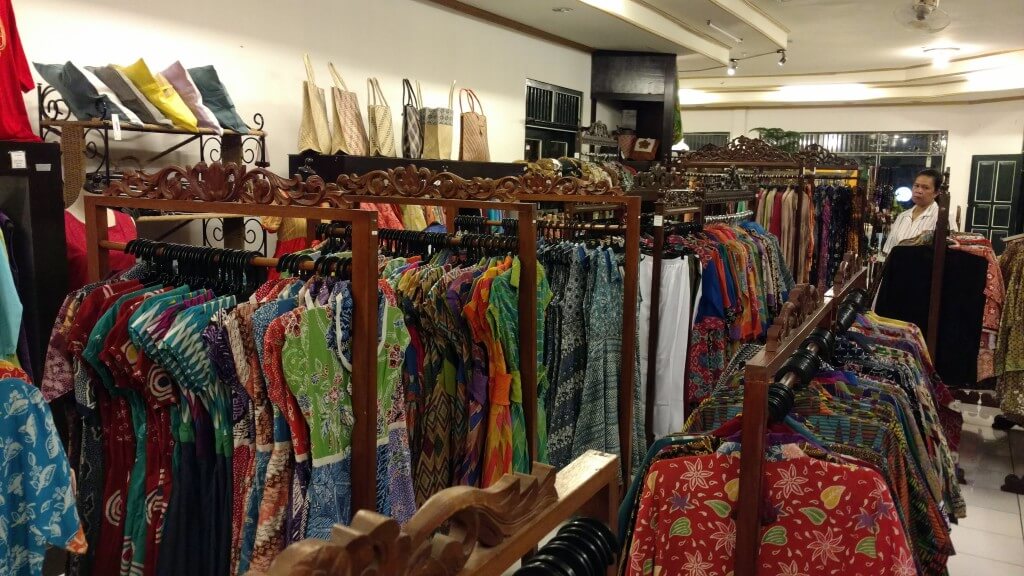 Besides look at batik, there are some other things that you have to do on a visit there.  One of them is to eat at a restaurant called Gudeg Yu Djum. 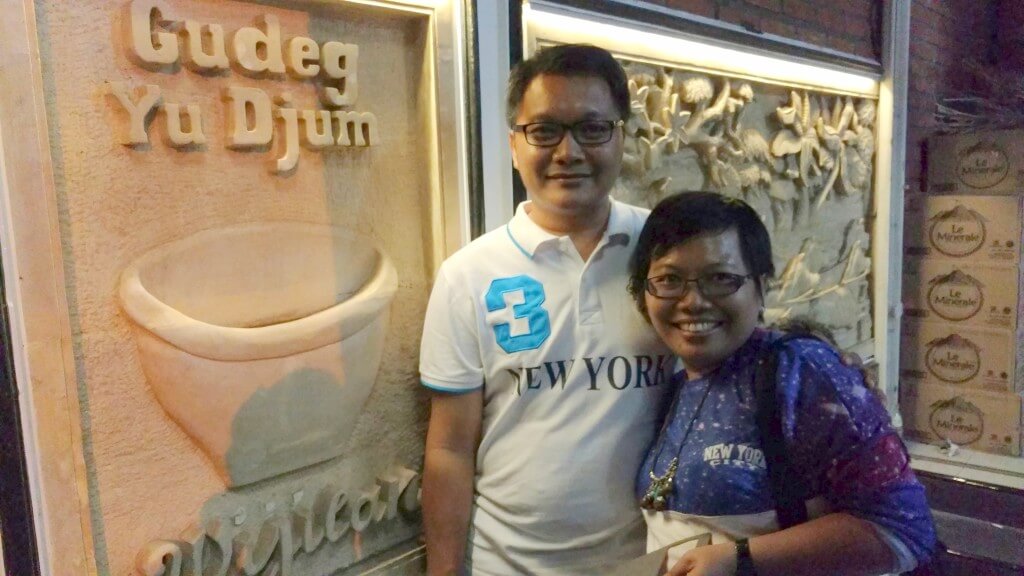 The food is cooked in a particular way–I’m not sure what the actual process is or even what the recipe is–but I was served Nasi Gudeg Krecek Telur Dada–which was rice, chicken, egg, and a cooked jackfruit condiment. 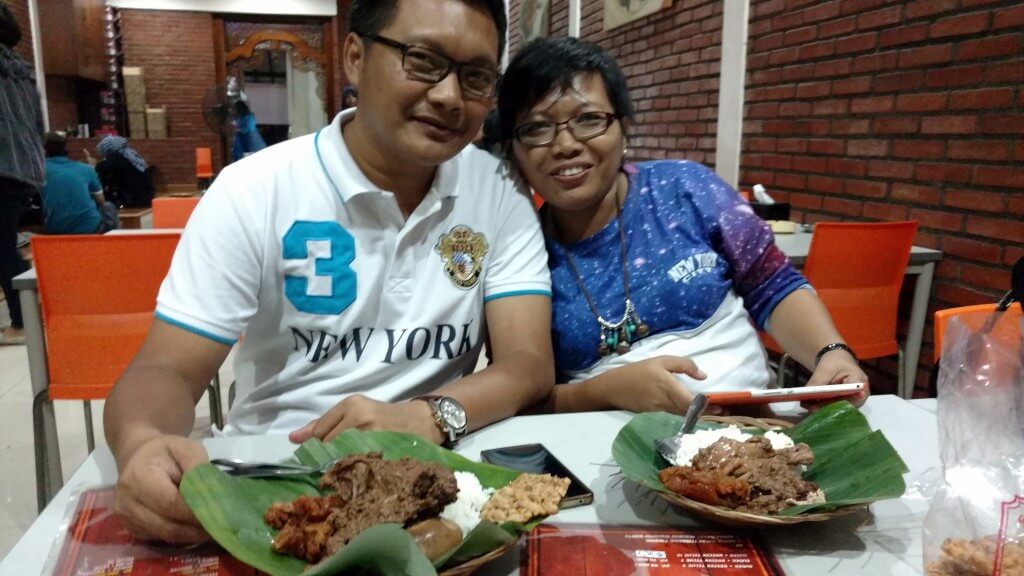 A drive through Jogjakarta on the way back to the hotel took us by the main square that was full of pedal taxis that were decorated with colored lights.  Some were animals and others just different shapes and decorations,. 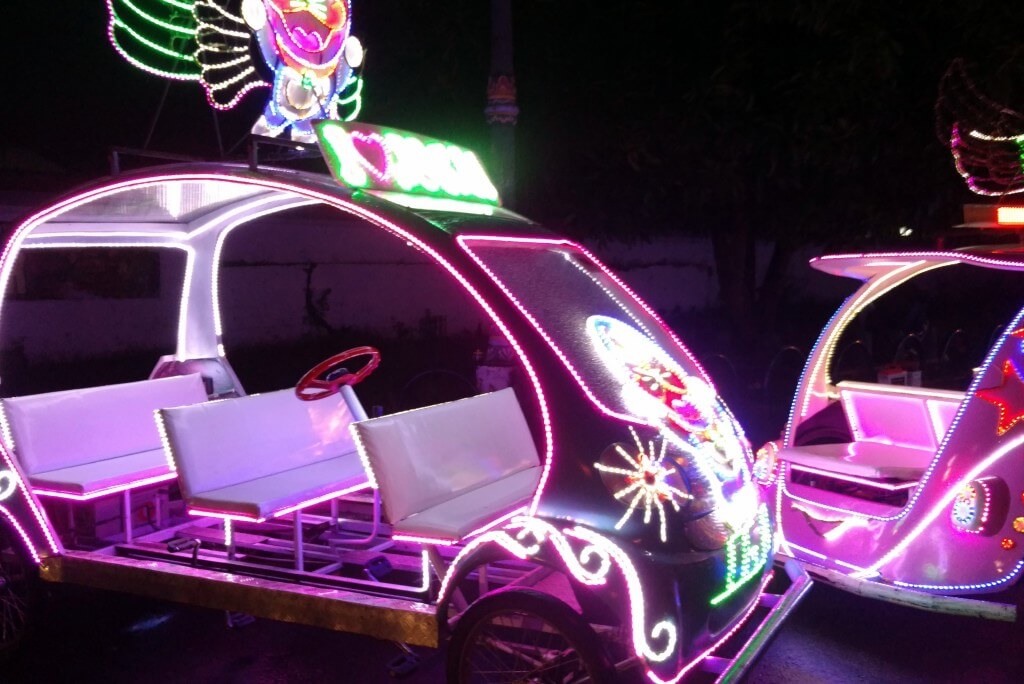 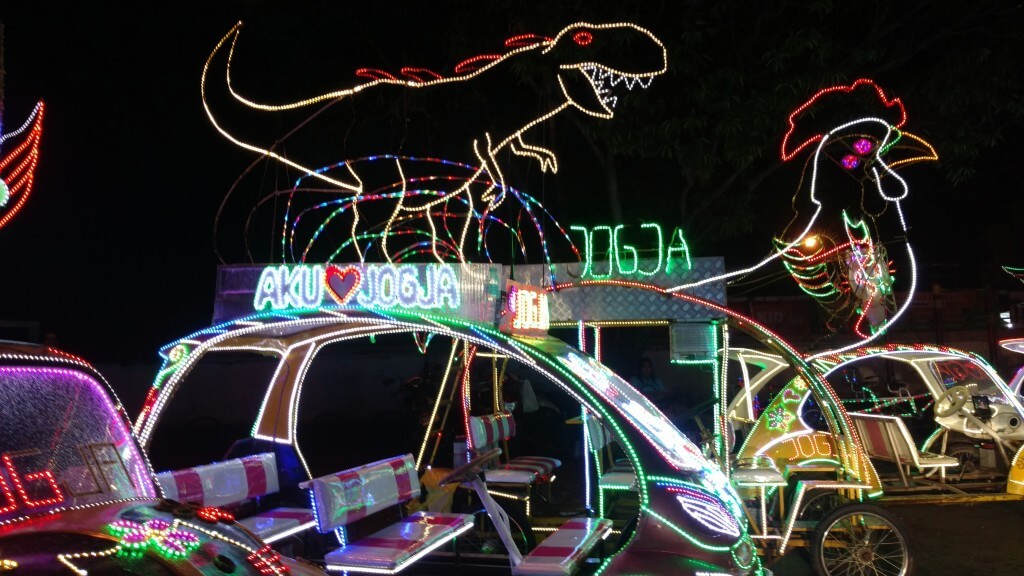 There were dozens of them, and apparently part of an evening’s entertainment is to hire one of them and be driven around the square–or perhaps anywhere else you wanted to go.

The following day we were back at the main square, because it is at this location that each Sultan is enthroned in a very lavish ceremony. The current Sultan (#10) was enthroned in 1989 and is in his late seventies with five daughters from only one wife.  He is the first monogamous Sultan in their history. With only daughters the sultanate will pass on to his brother or nephew depending on who survives.  It is a very lavish ceremony even though the Sultan does not have any political power anymore since Indonesia is a republic—and I’m not quite sure how he is supported.

This is where the Sultan is enthroned: 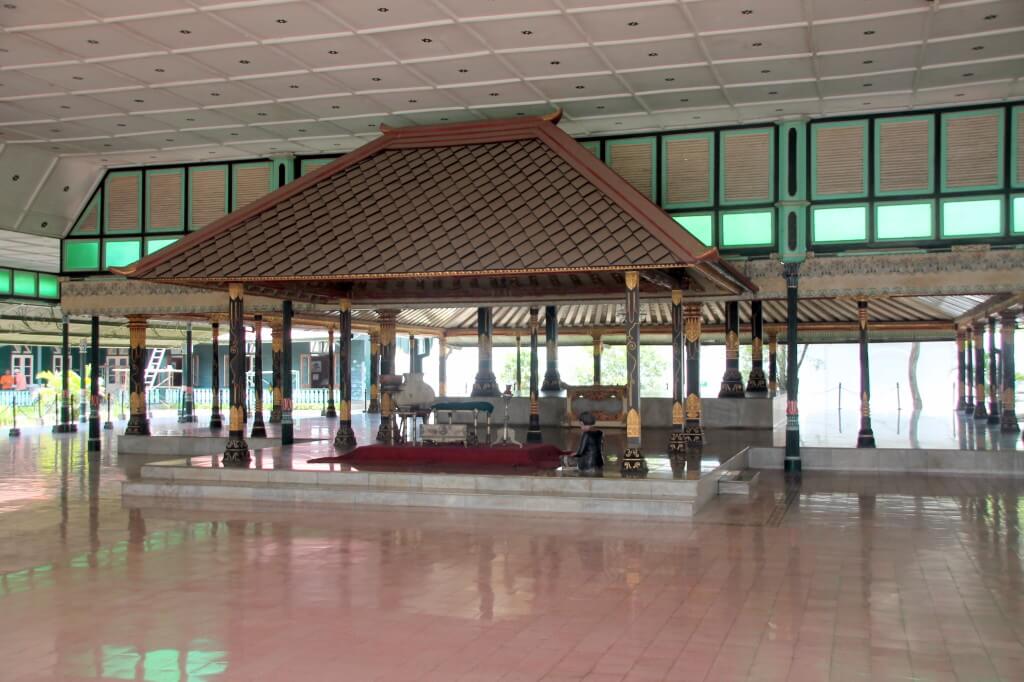 The current Sultan and his wife: 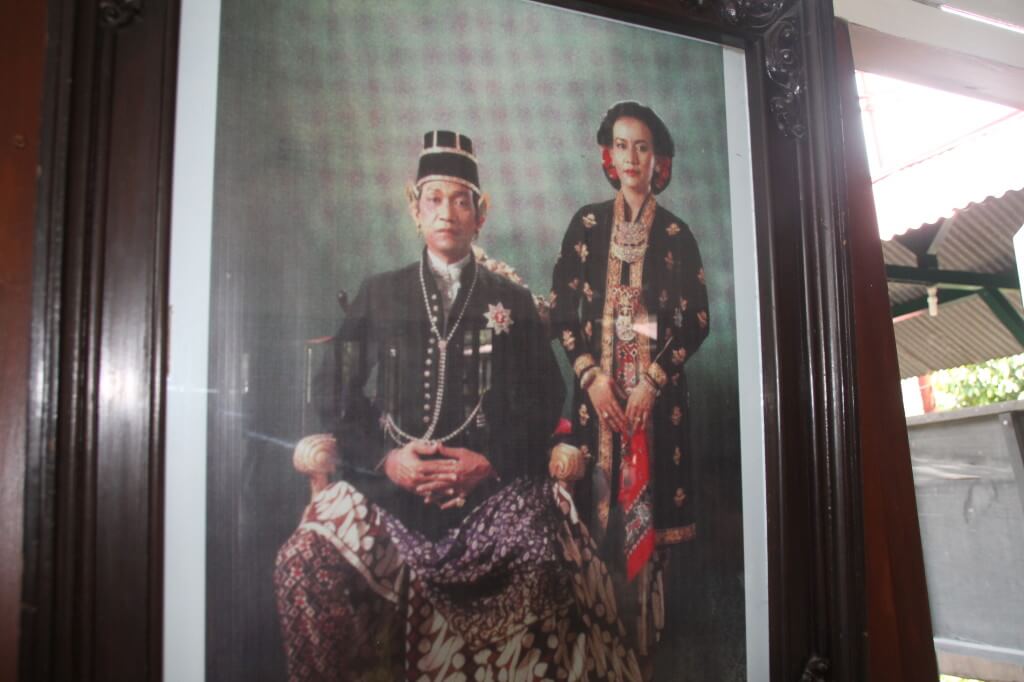 Roosters are apparently a symbol of strength, so there were a number of them in cages in the complex: 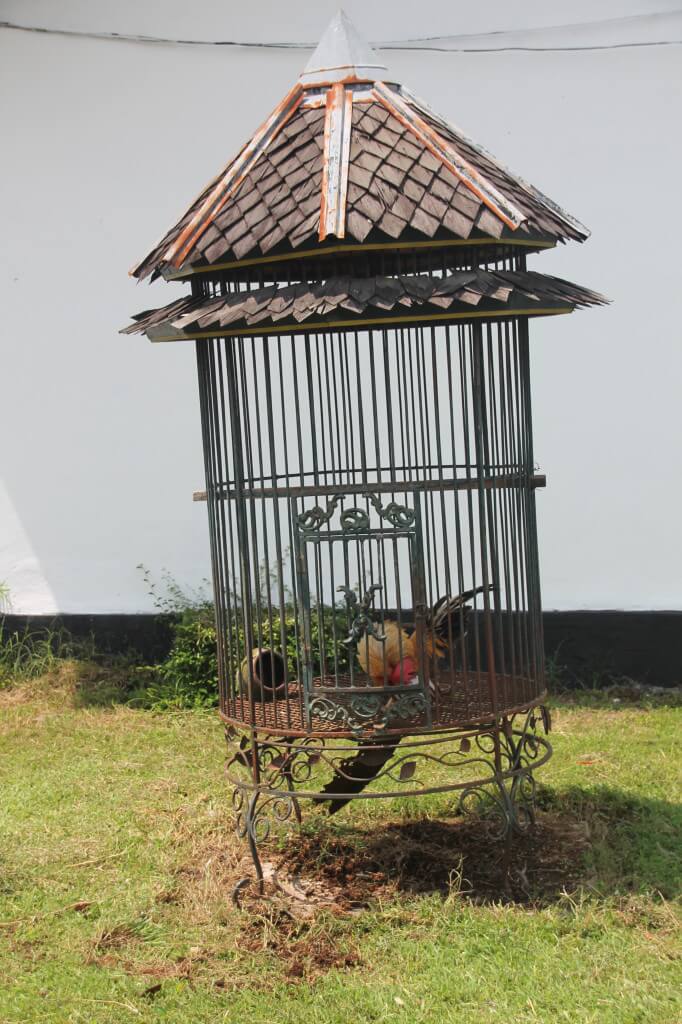 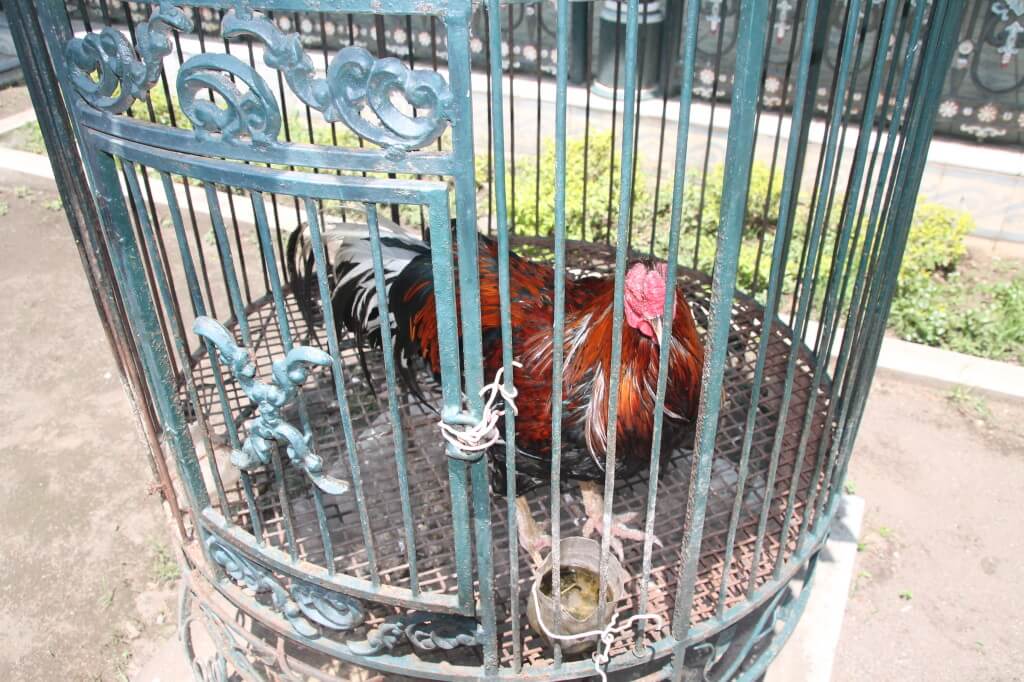 A frieze on a wall: 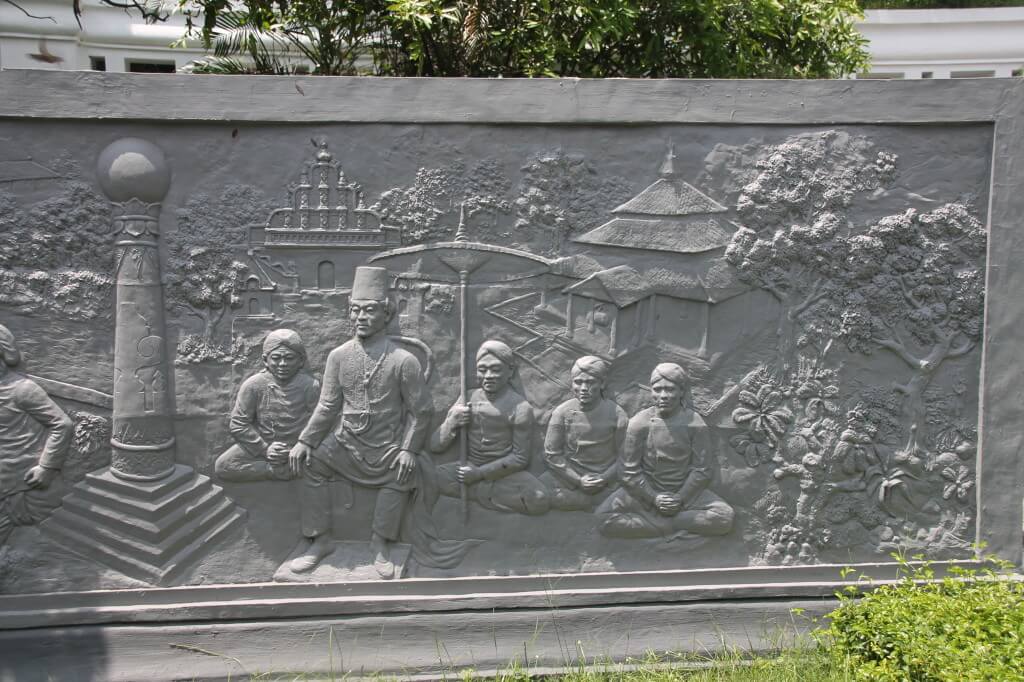 Following a tour of the enthronement area, we went to a couple locations where they make batik.  It is an interesting process that involves mixing wax with the colored dyes and then after applying, the wax is somehow melted away and it leaves the colors permanently in the cloth.

Heading towards the batik workshops: 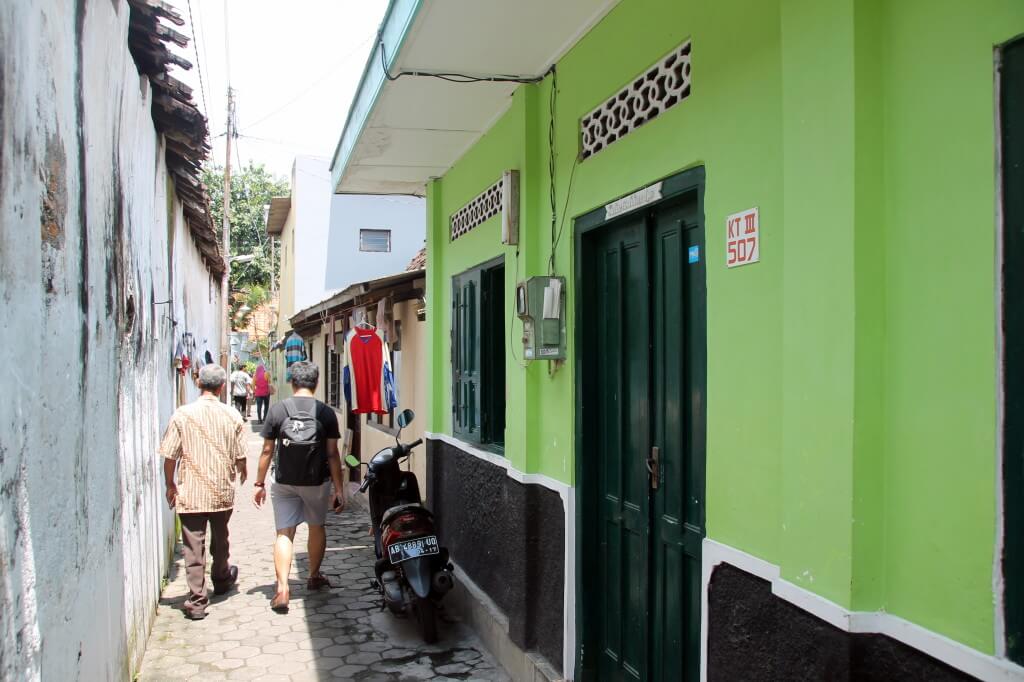 The waxy dye/paint is applied with a special tool that includes a reservoir for the liquid: 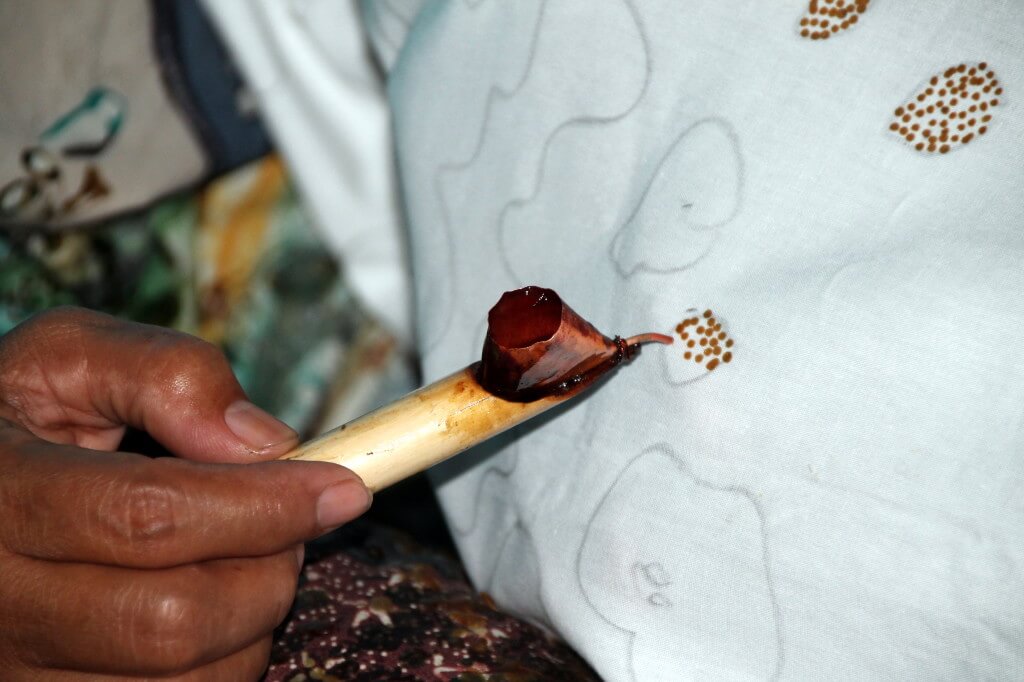 Another tool is used to create a consistent, uniform pattern on a piece of cloth: 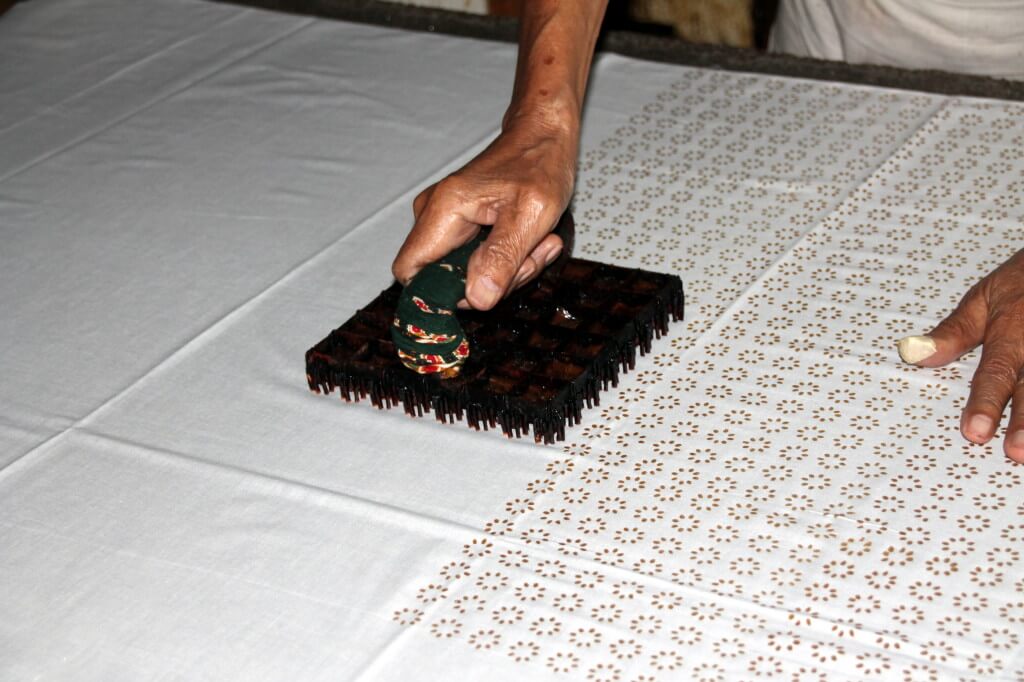 Here is someone painting a picture: 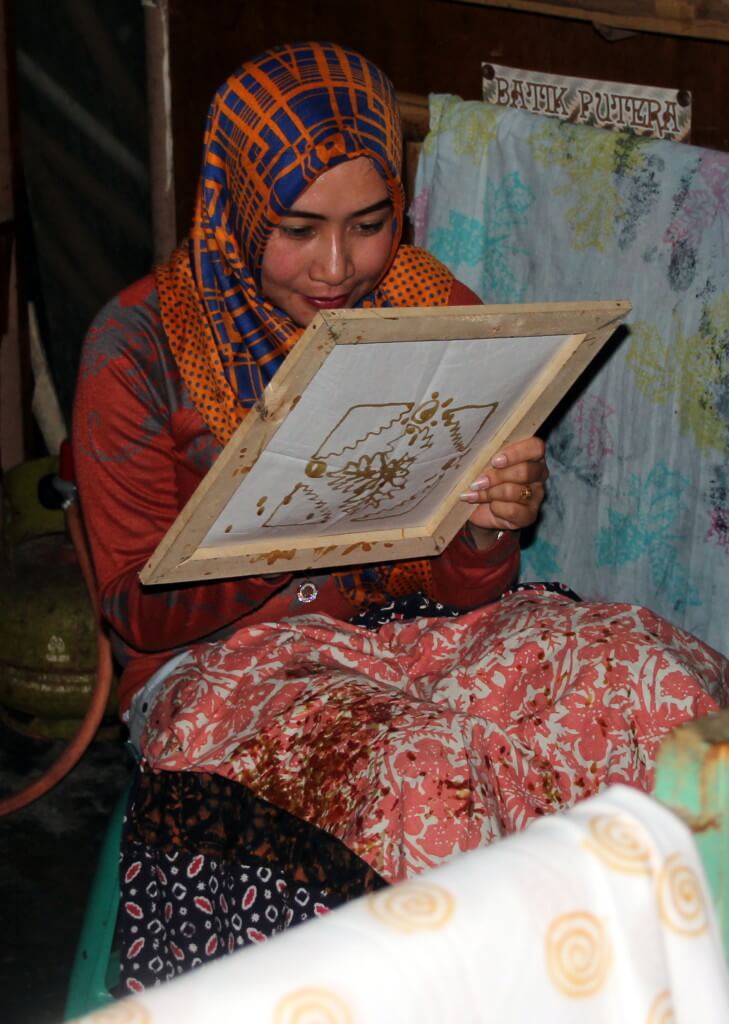 After the detail work is done, color can be added to the cloth: 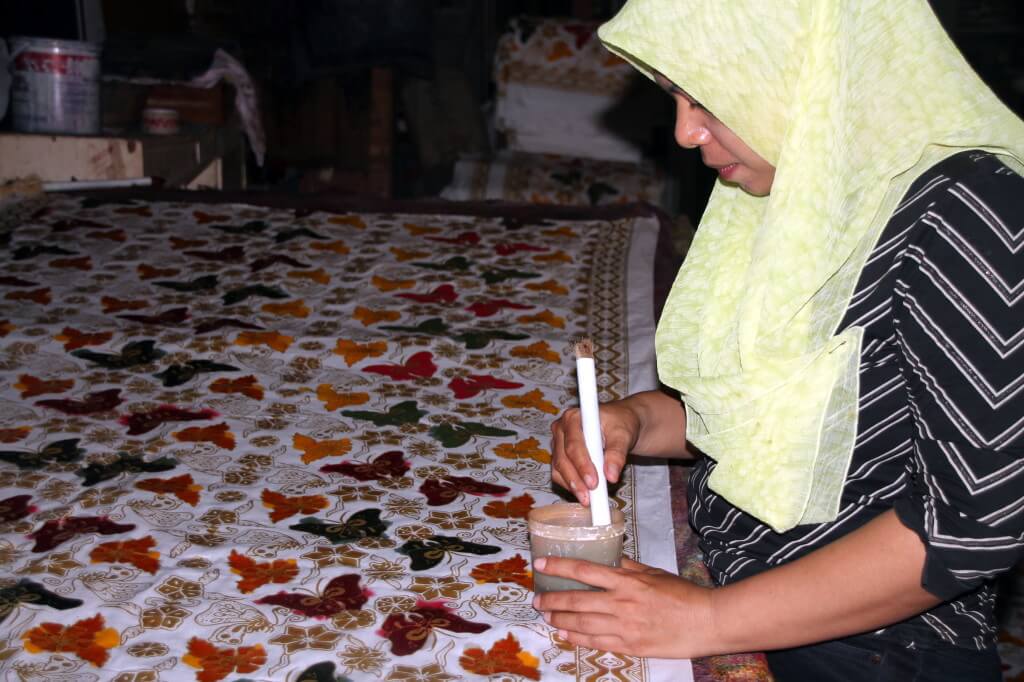 And finally, the cloth can be dyed in a vat: 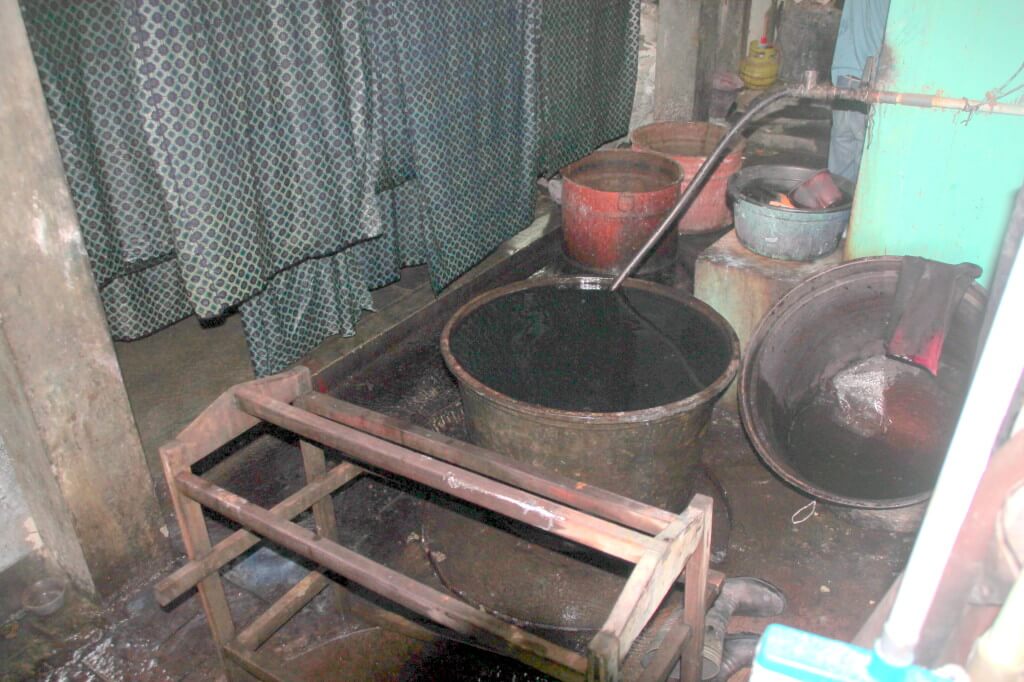 Hanging up the cloth to dry: 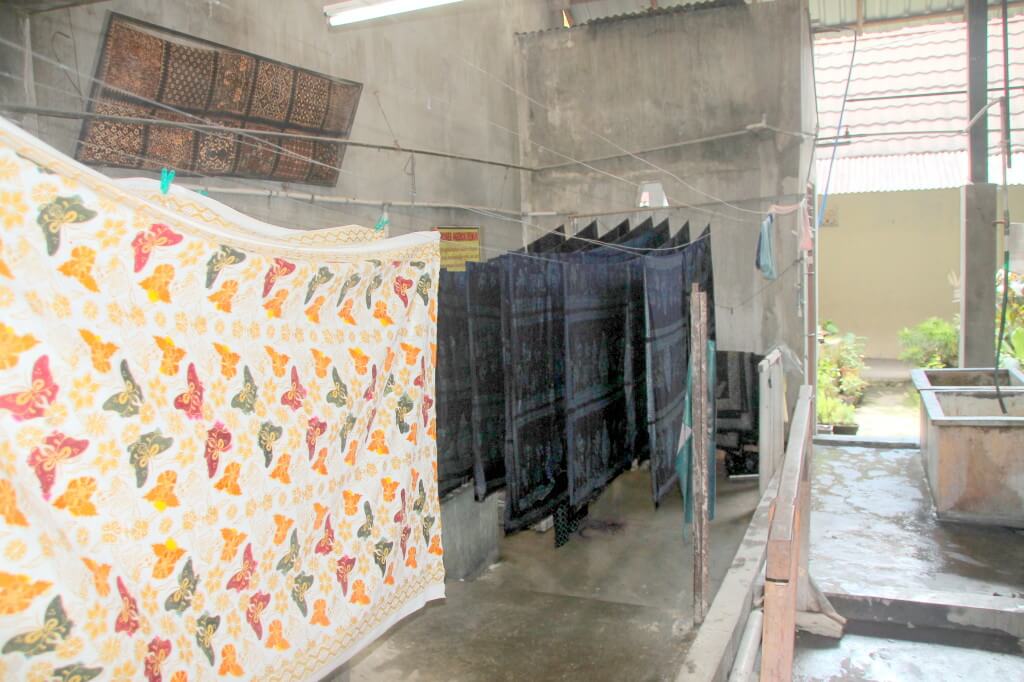